This past weekend, I had the pleasure of attending a screening of the film “She Did That.” This documentary follows the rise and success of several black female entrepreneurs. I had first heard about the film, from a weekly newsletter that I receive and was anxious to see it in theaters and hoped that it would come to NYC. On Saturday, it was screened at the UrbanWorld Film Festival, a film festival celebrating different cultures and ethnicities on screen.

The film “She Did That”, is by Renae Bluitt(@inhershoesblog) who also runs a successful blog entitled In Her Shoes.  The film highlights women such as Carol Price, who started Carol’s Daughter and Luvvie Ajayi(@luvvie), author of “I’m Judging You: The Do Better Manual”. It was inspirational to hear their stories and see just how much black women are changing the landscape of being a business owner. Black women have now become the fastest growing group of entrepreneurs being the majority owner in over 2.4 million businesses bringing in more than $42 billion in sales.  Not only are black women running successful businesses, but they are also starting their businesses with less. Black women are less likely to receive funding for a new business venture often using their own personal savings or retirement accounts. A stat from the film stated that black women raise $36,000 for a successful business, but white men lauching start-ups that fail will receive $1.3 million in funds. 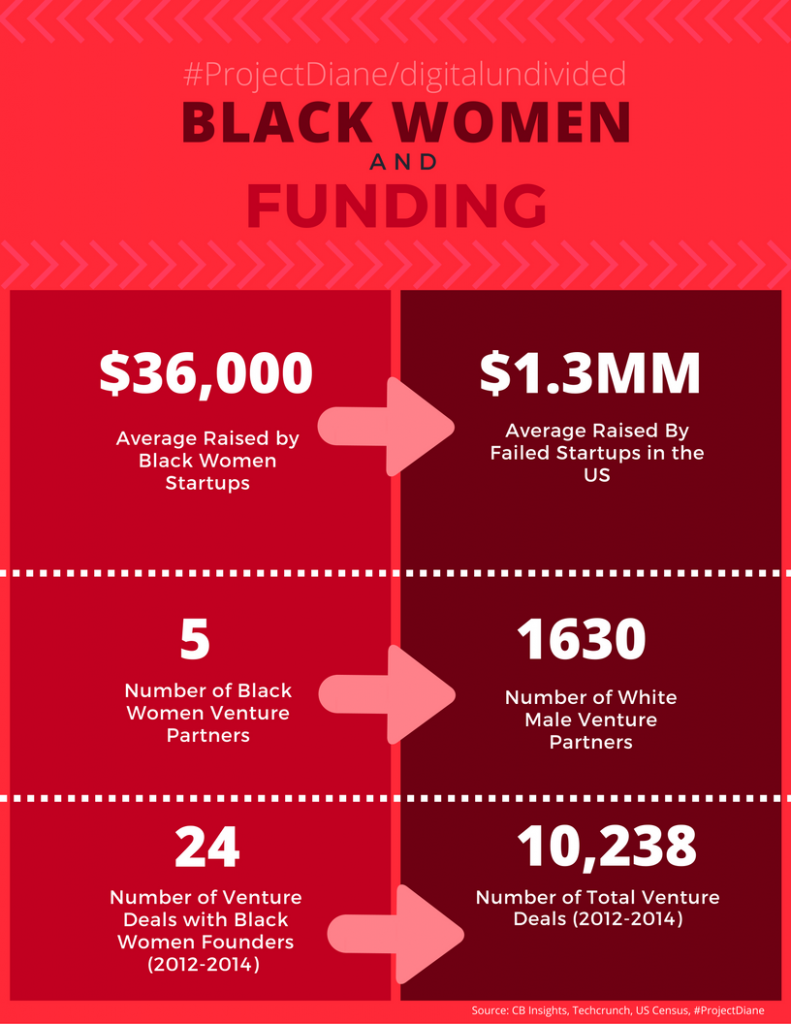 Imagine how much more successful we could be, if those in power began to think outside of the box and tried to imagine a world outside of their own. Many of the businesses that black women start are addressing a need that they can fill.  This need might not be evident to a room full of white men;for example why a colorful lip product will be successful. This was the story of Melissa Butler(@melissarbutler), who started Lip Bar. She went on Shark Tank and was quickly insulted and dismissed because none of the participants could see a world outside of their own.  If they had done a little bit of research they would have known that colorful, all natural, highly pigmented lipsticks would sell. It’s hard to raise capital if your market audience is a group of people who are often ignored from marketing to begin with.

I especially loved how the film touched on the importance of self-care and setting boundaries for you to maintain your sanity. Black women are often seen as being stronger than their white female counterparts and it’s the assumption that we can carry all of the world’s burdens on our shoulders. We have to begin to realize that we can’t and if we don’t take the time to take care of ourselves no one else will. I’ve written about the importance of mental health and the black community on my blog. I’m really glad that “She Did That” incorporated the highs and lows of running your own business.

Lastly, the film urges us to support black women owned businesses and this is something that I know I can improve on. I do try and support as many as I can when I can. I had been using Carol’s Daughter for years and have used many skin care products made by black women. I loved that I was able to learn about new businesses that I can now support such as The Crabby Shack(@thecrabbyshack), a restaurant not far from where I live, and Shell’s Loft(@shellsloft)which is an event space located in Brooklyn. By supporting a black woman owned business you are directly supporting her and her family. And let’s be honest, if we don’t support our black women then who will?

I too have had thoughts of running my own business. I don’t think I’m quite in that place yet where I’m ready to start but after seeing this film, I am reminded that so many amazing women before me have paved this road. I look forward to seeing what black women will be doing in the future and I would urge everyone to see this film!!

Apparently there’s an argument on the internet about buying a boy a kitchen set. This makes no sense to me. Cooking is a basic life skill that all grown humans should know how to do. We have got to stop gendering every single thing for our children. And we have to stop limiting them from our own antiquated beliefs.
I heard this in a message I was listening to this week and it really struck me. How many of us put off things such as our health or are dreams because we say we don’t have the time?
Today is two months since my myomectomy. I can’t believe how fast the time has flown. Some days I feel amazing, as though I’ve never had surgery. And other days I spend all day in bed because that’s all I have strength for. I feel like I need to learn who my body is all over again.
For many, today is a day of thanks but for Indigenous communities it can be a painful reminder of a tragic part of America’s history. As we celebrate all we are grateful for, let’s only remember the continued healing and work that needs to be done. Artwork by @medicinewithinspirit #indigenouspeoplesday #thanksgiving
My boss gave us off for the rest of the week starting today( thank you)! And while I have a ton of things to do I will be prioritizing rest. First up: a manicure!! #restisresistance #thanksgivingweek
My love language is gifts so I celebrate every major milestone in my life with a gift to myself. Part of my gift to myself for overcoming my surgery and the healing process (I anticipate I’ll be buying a few gifts for this milestone) was another bag from @brandonblackwoodnyc and it’s finally here!! Uh I love it!! Now I just need some place to wear it to!! #brandonblackwood #selflove #giftideas #surgeryrecovery #fibroidsawareness #fibroidhealing #blackownedbusiness
%d bloggers like this: